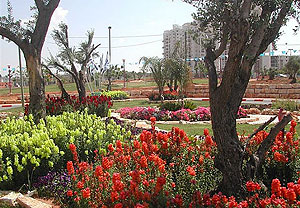 Givat Shmuel is a city in the center of the country, in the Sharon Valley, next to Bnei Brak, Petah Tikva and Ramat Gan.

The name of the city is translated as "Shmuel Hill" and given to him in honor of Shmuel Pineles, Zionist leader from Romania.

The city was founded in 1944 by a group of repatriates from Romania.

In the 50's and 60's Givat-Shmuel took repatriates - immigrants from Algeria, Morocco, Syria, Iraq, Iran, Bulgaria, Poland and Romania. Later, they were joined by repatriates from the USSR.

In 1998, Givat Shmuel grew strongly and its population doubled.

Givat Shmuel received the status of the city in 2007.


City streets and attractions near the city:

City streets and attractions near the city:

Israeli Settlements in Judea and Samaria

Religious Cities and Villages of Israel

Distances between Cities and Villages

The Health Care System in Israel

Hospitals and Medical Centers in Israel

Cities and Villages of Israel

Traveling in the Holy Land

The Antiquities of the Land of Israel